The Comedians: The Complete Series 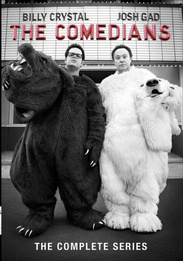 Generations and egos collide in this hillarious series starring Billy Crystal and Josh Gad about life behind the scenes of a ficticious late-night comedy show. Bowing to pressure from his ratings-obsessed network, a veteran comedian (Crystal) pairs with a younger comic (Gad) to from "The Billy & Josh Show." And although the two clash in both style and lifestyle, with help from an incredibly tolerant staff, including their overwrought producer (Stephanie Weir), they pull it together before every show- barely. With solid writing, engaging performances and beloved guest stars like Steven Weber, Dana Delaney and Mel Brooks, The Comedians is comedy in motion!