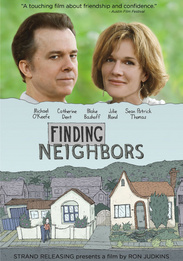 Sam Tucker (OscarÂ® nominee Michael OâKeefe, The Great Santini, Caddyshack), a successful stay-at-home graphic novelist, has hit a mid-life and creative crisis. Six months late on the deadline of his latest novel, Sam has already created turmoil with his publisher after his last book was a disaster. When his therapist wife Mary (Catherine Dent, TVâs The Shield) starts to suspect Sam of having an affair with Sherrie, his provocative and willing next-door neighbor, sheâs surprised to find out heâs actually spending all of his time with a man. Jeff, his gay fellow âhousewifeâ neighbor, is a fan of Samâs published works. As his friendship with Jeff grows and he begins to recapture his creative fire, Sam finds he may be losing the one thing he never doubted: his marriage.