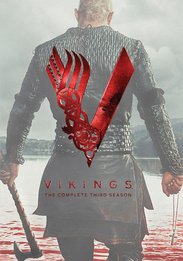 Prepare to raid and wage battle once again, in an ancient kingdom dominated by vengeance, lust and thrilling conquest, in Season 3 of Vikings. The gripping family saga of Ragnar, Rollo, Lagertha and Bjorn continues as loyalties are questioned and bonds of blood are tested. Now king of his people, Ragnar remains a restless wanderer, leading his band of Norse warriors on epic adventures from the shores of Essex to the mythical city of Paris. But stunning betrayals and hidden dangers will test Ragnar's courage and strength like never before.