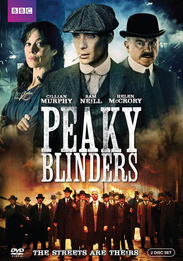 There are those who steer clear of the Peaky Blinders gang, and those who wish they had. In early 1920s Birmingham, the gang and their dangerous leader Tommy Shelby (Cillian Murphy, Batman Begins) rule the streets. But thatâs not enough for Shelby. He knows crime pays, but business makes you rich. In the searing first season of the acclaimed drama, the Blinders have the full attention of Inspector Campbell (Sam Neill, Jurassic Park), who has the monumental task of taking back the bloody streets of Birmingham. Brilliant performances and neck-snapping surprises fill the screen as Shelby battles to keep a stronghold on his evil underworld. Meet the Peaky Blinders.