Henry and Anne: The Lovers Who Changed History 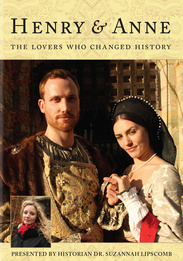 Historian Dr. Suzannah Lipscomb unfolds the extraordinary story of the tumultuous love affair between Henry VIII and Anne Boleyn. Using first-hand accounts from the time and visiting the places where Henry and Anne lived, the series delves into the passionate and volatile relationship that sent a queen to her death, amputated England from Europe, and led to hundreds of years of religious conflict.