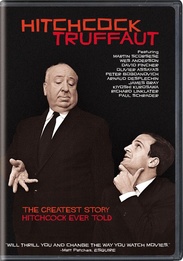 In 1962 Hitchcock and Truffaut locked themselves away in Hollywood for a week to excavate the secrets behind the mise-en-scÃ¨ne in cinema. Based on the original recordings of this meetingâused to produce the mythical book Hitchcock/Truffautâthis film illustrates the greatest cinema lesson of all time and plummets us into the world of the creator of Psycho, The Birds, and Vertigo.