Once Upon a Time: The Complete Fifth Season 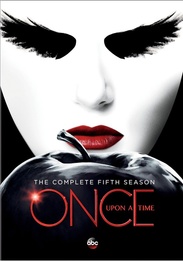 Darkness and Light. One conceals, the other reveals, but each is infinitely seductive. Prepare for the ultimate battle between these epic opposing forces in ABC's ONCE UPON A TIME: THE COMPLETE FIFTH SEASON. When the Savior becomes the "Dark Swan," the lines between good and evil blur as Emma begins to relish the intoxicating taste of absolute power. Terrified she'll succumb, Emma and Hook visit Camelot to find the one person who may be able to aid them: Merlin. Unfortunately, King Arthur proves treacherous, and when he joins forces with a vengeful Zelena, Emma and Hook's hopes are shattered. Now Emma and her entire Storybrooke family must embark on a chilling descent to the Underworld of Hades, where they'll try to rescue Hook from a fate worse than death... with "help" from Rumplestiltskin. But will any of them survive the journey? Treat yourself to all 23 riveting episodes of Season 5. Plus, indulge your senses with never-before-seen bonus features as you share the romance, relive the magic and unlock the secrets of ONCE UPON A TIME.