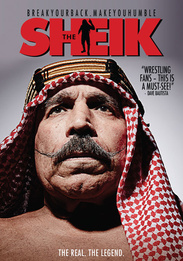 Filmed extensively between 2006 and 2014, this is a touching story about the unlikely revival of a former wrestling superstar. At age 72, the Sheik has embraced an unlikely new career as an outlandish social media sensation; known for hilarious outbursts and massively popular antics. Watch as we recount the Sheik's one-of-a-kind life journey. The film explores the Sheik's personal relationships with those closest to him, and those who know him best: his wife, his children, his grandchildren, his contemporaries and colleagues. Interviews were conducted with the Sheik's family, Wrestling and Iranian historians, friends and over 25 wrestling superstars.