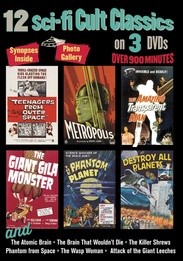 There was a time when our past cinematic idea of the future bordered on the visionary and the absurd. We were on the cusp of the Atomic Age and anything was possible. Then, when our National Space Program started to launch rockets into space, the science fiction movie genre exploded onto the big screen, exploiting our curiosities and fears of the cosmic unknown. Science fiction producers pandered to the public with questionable scientific discoveries and partial truths involving science of the future. The plots, while not completely believable, offered situations that featured different laws of science, separate from those known from past or present, and embraced the concepts of environmental change, space travel, and life on other planets, among others. All great fodder for filmmakers. This Sci-Fi Cult Classics 3 DVD Collectorâs Set brings you 12 select films that helped define the emerging days of science fiction in films from the late 1920âs through the late 1960âs.