Property Is No Longer A Theft 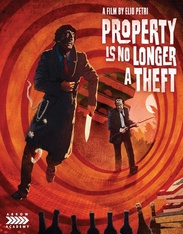 Having tackled the corrupting nature of power with Investigation of a Citizen Above Suspicion and taken an angry, impassioned look at labour relations with The Working Class Goes to Heaven, Italian master Elio Petri next turned his attentions to capitalism for the darkly comic Property is No Longer a Theft. A young bank clerk (Flavio Bucci, the blind pianist in Dario Argento's Suspiria), denied a loan by his employer, decides to exact his revenge the local butcher (Ugo Tognazzi, La Grande bouffe) who is not only a nasty, violent, greedy piece of work but also one of the bank's star customers. Quitting his job, the clerk devotes all of his time tormenting the butcher, stealing his possessions one-by-one, including his mistress (Daria Nicolodi, Deep Red). Told in an off-kilter fashion by Petri, abetted by the woozy sound design and another outstanding score by Ennio Morricone, Property is No Longer a Theft presents a caustic, blackly comic look at a corrupt society.