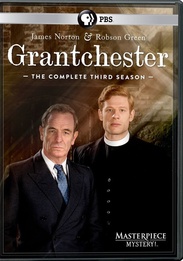 Sidney Chambers (James Norton, Happy Valley) is a handsome, jazz-loving village vicar haunted by his past. Geordie Keating (Robson Green, Wires in the Blood, Touching Evil) is a hard-boiled police detective, overworked and weary. Together they solve crimes and right wrongs in picturesque 1950s Cambridge. Based on a novel by James Runcie, the hit British series returns with Chambers having doubts about his pious lifestyle, now that his old flame Amanda (Morven Christie) has left her husband.