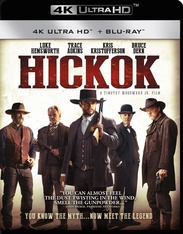 infamous gunslinger and outlaw "Wild Bill" Hickok (Luke Hemsworth) attempts to escape his past by settling in the small town of Abilene, Kansas. The mayor (Kris Kristofferson), captivated by Wild Bill's unparalleled gun skills, offers him a job as the town marshal. Attempts to protect the town are soon challenged when a band of outlaws threaten Wild Bill and the laws he administered. Among the outlaws are powerful saloon owner Phil Poe (Trace Adkins), whose relationship with Bill's ex-lover (Cameron Richardson) stirs tension. Poe puts a bounty on Wild Billâs head but with the help of lawman Hardin aka Little Arkansas, Wild Bill sets out to fight the villainous bandits and save Abilene from danger.