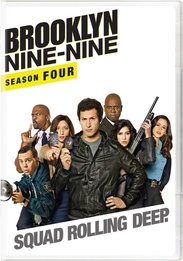 Detective Jake Peralta (Andy Samberg) and the Nine-Nine are taking #SquadGoals to a whole new level! With a precinct wedding, the annual Halloween heist, and the Pontiac Bandit's most hilarious appearance yetâ this season has even Jake going "full Santiago" (binder and all). From Dan Goor and Mike Schur (The Office and Parks and Recreation) come all 22 kick-ass, season four episodes of the Golden GlobeÂ® Award-winning Brooklyn Nine-Nine.