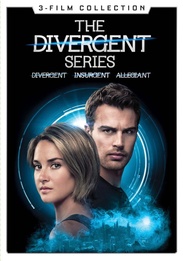 Join the spectacular adventure as Tris (Shailene Woodley)âa Divergent who will never fit in a future world divided by factionsâunites with the mysterious Four (Theo James) to unlock the truth about the past, fighting to protect her loved ones and save her city in the first three action-packed movies from THE DIVERGENT SERIES.