Rise of the Footsoldier Part II 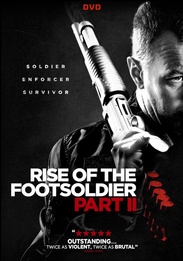 Still reeling from the murder of three close friends, gangster Carlton Leach tries to numb the pain through drugs and desire. But he soon realizes his path to salvation lies in climbing the ranks of the criminal underworld he abandoned. Once at the top, he plans to use his power to destroy his friendsâ killers once and for all...but power is a dangerous thing.