The Scent of Rain & Lightning 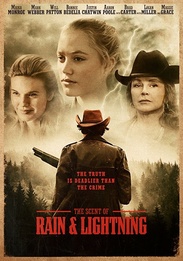 A Midwestern twenty-something whose past resurfaces when the man convicted of killing her parents has his sentence pardoned, Jody begins to question the facts behind her parents' deaths and gradually faces the possibility that the wrong man was convicted of the crime. The further Joday delves into the past, she is forced to revisit old wounds.

Rated R for violence, language, and some sexual content.