The Truth About Lies 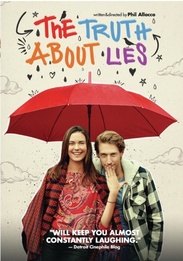 Gilby Smalls is having a meltdown. He's just been fired from his job, lost his apartment in a fire and his girlfriend gave him the boot. Forced to move in with his booze-swindling man-obsessed mother, heâs desperate to turn things around. Gilby weaves a web of lies; one bigger than the next and finds himself in too deep when the truth proves to be too much to admit and even harder to accept.