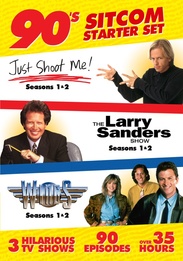 Jump start your TV collection with 3 of most beloved comedies of the 1990s. Featuring the groundbreaking comedy of THE LARRY SANDERS SHOW, the workplace misadventures of a fashion magazine in JUST SHOOT ME, and high-flying antics of the crew at Tom Nevers Field in WINGS. Enjoy the first 2 seasons from each series together for an unforgettable and hilarious collections of laughs.