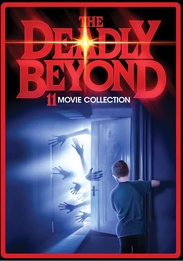 A group of kids on the run from evil scientists, a forbidden wasteland populated by bloodthirsty mutants and a family haunted by mysterious electronic pulses are just a few of the totally 80s tropes in this undeniably strange sci-fi/horror movie collection. With killer lineup of talent including Liam Neeson, Molly Ringwald, Mark Hamill, Joey Lawrence, Ben Kingsley, Karen Black, F. Murray Abraham, Bill Paxton and countless others, this 11-Movie Collection is one that you need to see to believe.

Pulse
(1988) - Color - PG-13
Cliff De Young, Roxanne Hart, Joey Lawrence, Matthew Lawrence
In today's world of modern conveniences, everything we rely on is run by electricity. But what happens if the power we take for granted turns against us?

Spacehunter: Adventures in the Forbidden Zone
(1983) - Color - PG
Peter Stauss, Molly Ringwald, Andrea Marcovicci
In the year 2136, Wolff, a wily salvage pilot and intergalactic bounty hunter, answers a distress signal on Terra Eleven for a rescue mission to save 3 women.

My Momâs a Werewolf
(1989) - Color - PG
Susan Blakely, John Saxon, John Schuck, Marcia Wallace, Ruth Buzzi
A housewife finds herself transforming into a werewolf after a bite from a pet shop owner she meets. Her daughter and a friend set out to find a cure.

The Hearse
(1980) - Color - PG
Trish Van Devere, Joseph Cotten, Donald Hotton, David Gautreaux
A young woman inherits her aunt's home and moves in after a bad divorce. But rumors of witchcraft and mysterious visions haunt her and foretell of dangers.

Lurkers
(1988) - Color - R
Christine Moore, Gary Warner, Marina Taylor
A woman who had a nightmarish childhood due to her abusive mother has become engaged to be married and begins experiencing strange occurrences.

Slipstream
(1989) - Color - PG-13
Bill Paxton, Mark Hamill, Ben Kingsley, F. Murray Abraham
In the future when the Earth has suffered an environmental disaster, a fugitive has been captured by a pair of cops with the intent of bringing him in for the huge reward.

Warriors of the Wasteland
(1983) - Color - R
Fred Williamson, Timothy Brent, George Eastman
In a post-apocalyptic future, a group of weary survivors is faced with a relentless onslaught from a gang of roving bandits that threaten the survival of the human race.

Eternal Evil
(1985) - Color - R
Winston Rekert, Karen Black, Andrew Bednarski
A bored TV director is introduced to the black arts and learns to separate his spirit from his body. Unfortunately, while he is sleeping, it roams the streets in a murderous rampage.