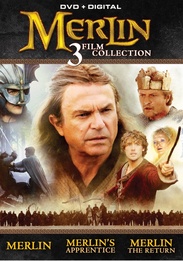 IMAGINE A WORLD WHERE DREAMS COME TRUEâ¦AND MAGIC IS REAL!

In a time long past, when magic was fading from the world of men, the malevolent sorceress Mab (Miranda Richardson) summoned forth a mighty wizard to keep the power of the Old Ways alive. The wizard's name was Merlin (Sam Neill). But when his heart is touched by the love of the beautiful Nimue (Isabella Rossellini), Merlin turns away from Mab's dark enchantments. Allying himself with the young warrior who will rise to become the legendary King Arthur, Merlin pledges his mystic skills to Arthur's visionary cause: Bringing peace and justice to the realm haunted by monsters and ravaged by war and setting the stage for the ultimate clash of Good versus Evil.

For 1500 years, the powers of Merlin (Rik Mayall) have kept the evil Mordred (Craig Sheffer) and his mother Morgana (Grethe Fox) captive in another world. When a present-day scientist (Tia Carrere) stumbles upon the gateway between this world and the one Mordred is imprisoned in, it's up to a recently re-awakened King Arthur (Patrick Bergin) Merlin, and Lancelot (Adrian Paul) to stop Mordred from returning.

The great sorcerer Merlin has returned to Camelot, a kingdom now vulnerable to ill fates and war since the theft of the Holy Grail, its greatest gift and protection. With the help of Jack, an irascible young beggar-thief imbued with his own unruly magic, the fight against unknown dangers begins-to find the Grail, restore it to its rightful place, and bring Camelot back to its glory days.