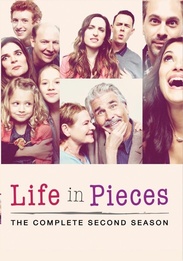 LIFE IN PIECES is a comedy about one big happy family and its sometimes awkward, often hilarious, and ultimately beautiful milestone moments as told by its various members. Of the three siblings, middle child Matt has finally proposed to his true love, Colleen; coddled, youngest brother Greg and his wife Jen are overwhelmed by the surprising news that they are pregnant with their second child as Greg finds himself suddenly unemployed; and the eldest, Heather, and her husband Tim are coming to terms with their oldest son and his girlfriend eloping just after graduating high school. Joan is the family's adoring matriarch who would do anything for her kids -- as long as she agrees with it -- and John is the gregarious patriarch who's searching for ways to spend more time with his family. In four short stories each week, the family tries to savor the little pieces of time that flash by but add up to what life's all about.