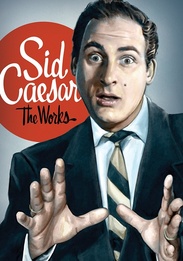 Without Sid Caesar, comedy would have been a lot less funny.

In 1949, television was an infant technology. No one knew how long it would last ... or whether it would last at all. A 27-year-old Broadway star, along with a team of writers and performers who would become legendary, including Imogene Coca, Nanette Fabray, Mel Brooks, Carl Reiner, Larry Gelbart, Neil Simon, and Woody Allen, revolutionized sketch comedy by telling stories rooted in the human condition. They redefined television sketch comedy, and paved the way for landmark comedy shows like Saturday Night Live.

Sid Caesar The Works is a comprehensive collection of the best work of Caesar and his teams, beginning with The Admiral Broadway Review, through Your Show Of Shows and Caesarâs Hour, and featuring many interviews and extras, including the 2014 Paley Center For Media Tribute with Mel Brooks, Carl Reiner and Billy Crystal.