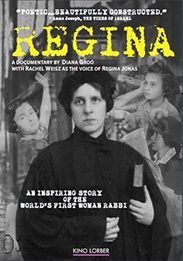 Diana GroÃ³âs poetic documentary Regina tells the story of Regina Jonas (1902-1944), who made history by becoming the first officially ordained woman rabbi in the world. Through the graceful use of archival footage, and sensitive voiceover from Rachel Weisz as Regina, scenes from Jewish life in Berlin during the early twentieth century come to life. Regina Jonas, the daughter of an Orthodox Jewish peddler, grew up in Berlinâs slum, studied at the liberal College for the Scientific Study of Judaism beginning in 1924, and was ordained in 1935. Her sermons brought encouragement to the persecuted German Jews. At age 37, she met the love of her life, Rabbi Josef Norden. Both of them were deported to Theresienstadt concentration camp. Only their love letters survived the Holocaust.