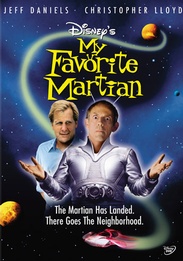 A befuddled martian crash-lands on Earth, assumes human form and befriends a TV-news producer. Based on the TV series.