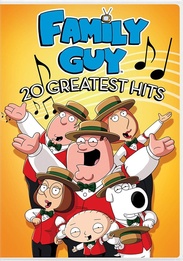 Are you tired of loving Family Guy just for the hilarious jokes, sidesplitting sight gags and outrageously absurd cutaways? We've got you covered! Celebrate the showâs 20th anniversary with this marvelously musical collection of 20 song-and-dance-filled episodes, along with a symphony of extras created exclusively for this release. So grab "A Bag of Weed," roast a "Candy Quahog Marshmallow!" and enjoy "The FCC Song" with your favorite "Shipoopi," because "You've Got a Lot to See" (and hear) when you watch Family Guy's 20 Greatest Hits!