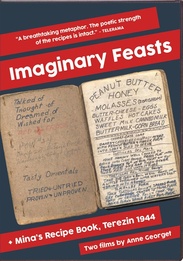 IMAGINARY FEASTS and MINAâS RECIPE BOOK tell little-known but fascinating stories of imagination and resilience in the face of the worst kind of deprivation.

The accompanying film, MINAâS RECIPE BOOK, follows the journey of one of these recipe books. It was one in which Anny Sternâs mother, Mina, hand-wrote recipes while imprisoned at a Nazi concentration camp in Terezin, in Czechoslovakia. Mina died at Terezin, and it would take 25 years for her recipe book to make its way to her daughter.

IMAGINARY FEASTS and MINAâS RECIPE BOOK are testaments to the strength of women and men who, even in the most dire circumstances, created a unique form of resistance.