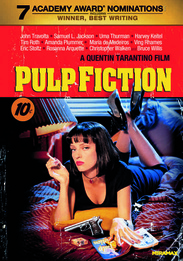 Tarantino weaves together several stories that juggle plot lines, time frames and characters that inhabit the seamy side of Los Angeles -- including Travolta and Jackson as hit-men with strong moral codes, Willis as a low-life boxer and, of course, The Gimp.

Rated R for strong graphic violence and drug use, pervasive strong language and some sexuality.