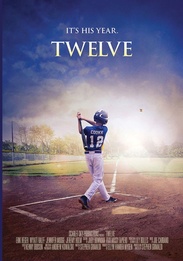 TWELVE follows the inspiring story of Kyle Cooke an 11 year-old baseball player who, after moving to a new town and being unjustly cut from its all-star team, stops at nothing to make it to the World Series the following year. Kyles father, realizing his son may never get a chance to pursue his dream, finagles a way to get Kyle on a team in an opposing district. Understanding this is his one and only shot, Kyle uses the rejection as motivation to become the best 12 year-old player in the state possibly the world. Ultimately, Kyle faces the team that cut him and, with the state championship on the line, discovers a greatness even he didnt know he possessed.