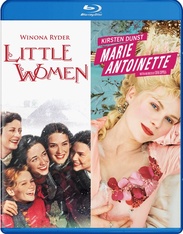 LITTLE WOMEN
Louisa May Alcott's classic coming-of-age story follows the childhood adventures of the four free-spirited March sisters: beautiful Meg (Trini Alvarado), fragile Beth (Claire Danes), romantic Amy (Kirsten Dunst) and impetuous Jo (Winona Ryder), who's determined to defy social conventions by seeking her fame and fortune as a writer. As Jo chronicles the family's struggle during the war, their turbulent romances and their lasting friendship, her story unwraps a gift of humor and heartfelt emotions that no one - young or old, male or female - can resist.