The UnXplained: Season One 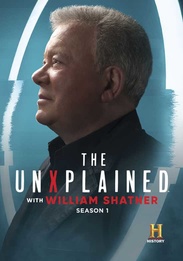 Hosted and executive produced by Golden GlobeÂ®- and Emmy AwardÂ®-winning actor, William Shatner, this hit series from HISTORYÂ® tackles subjects that have mystified mankind for centuries â from Japanâs ominous "Suicide Forest" to strange creatures like the Chupacabra to bizarre Voodoo rituals. With compelling contributions from scientists, historians, and first-hand witnesses, each episode seeks to shed light on how the seemingly impossible can happen, providing answers for some while leaving others . . . UnXplained.