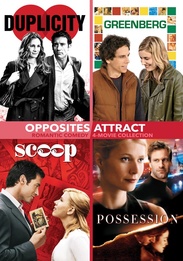 Romance is in the air with this all-star collection of leading men and women who find love in the most unlikeliest of scenarios! Witness the dynamic on-screen chemistry between Clive Owens and Julia Roberts, Ben Stiller and Greta Gerwig, Aaron Eckhart and Gwyneth Paltrow, and Hugh Jackman and Scarlett Johansson in a binge-worthy rom-com collection.

Duplicity - Two self-styled criminal masterminds find themselves in a turf battle neither much cares about in this underworld story that balances comedy against drama.

Greenberg - A New Yorker moves to Los Angeles in order to figure out his life while he housesits for his brother, and he soon sparks with his brother's assistant.

Scoop - An American journalism student in London scoops a big story, and begins an affair with an aristocrat as the incident unfurls.

Possession - A pair of literary sleuths unearth the amorous secret of two Victorian poets only to find themselves falling under a passionate spell.