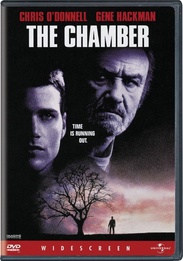 In 28 days, convicted killer and white supremacist Sam Cayhall, the oldest inmate on death row in America, will die in the Mississippi gas chamber for the 1967 bombing murders of two small children. While counting down his final days, Sam is visited by a stranger: young, inexperienced law associate Adam Hall, who comes to Parchman Prison to try and save this unrepentant racist and find meaning in his own life. Although his late father changed his family name, Adam is Sam's grandson.

Rated R for violent images and some language.