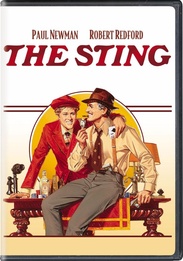 Newman and Redford are reunited with director Hill for this comedic caper about two men who are out to put "the sting" on a hood who had one of their friends bumped off. Scott Joplin's ragtime songs -- adapted by Marvin Hamlisch -- underscore the action with a rollicking flair.