The Last Woman On Earth 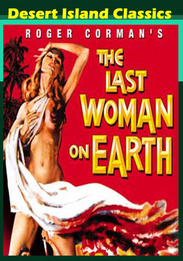 A global holocaust decimates the population of the entire world except for two men and a beautiful woman. Dead bodies litter the streets of a lifeless city. Fleeing the horror, the three survivors take refuge on the fringes of a tropical jungle. In an explosion of sexual tension, the men clash in the pursuit of their desires and engage in an all-out war to possess The Last Woman On Earth. Roger Corman directed this color spectacle in Puerto Rico, back to back with Creature From the Haunted Sea and Battle of Blood Island, another Filmgroup production. It shared much of the same technical crew with both films, and in the case of Creature From the Haunted Sea, the same cast. This was the first produced screenplay for Academy Award-winning writer Robert Towne (Chinatown), who also appears in the film (using the pseudonym Edward Wain) as the young lawyer fighting for control of this sexually charged triangle.