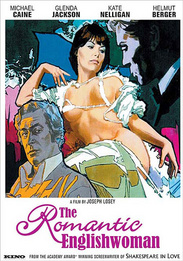 Caine plays successful novelist Lewis Fielding, whose imagination spins ever-more elaborate scenarios of infidelity when his wife Elizabeth (Glenda Jackson) goes on a solo vacation to Baden Baden. When a young man she met there, Thomas (Helmut Berger), rings their home and shows up for tea, the couple's mutual jealousies explode to the surface. The line between Fielding's reality and his fantasies becomes blurred, breaking down altogether in the final act, when their lives turn into a suspense thriller featuring an enigmatic hit man and secret drug deals.