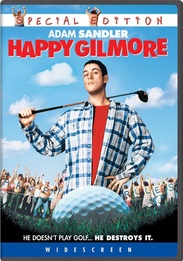 Adam Sandler stars in a hilarious comedy that scores a hole-in-one for gut-busting wit and outrageous slapstick. When a hockey player discovers he has an amazing golf swing, he brings his ferocious temper and outlandish antics to the pro golfers' tour.

Rated PG-13 for language and some comic sexuality.