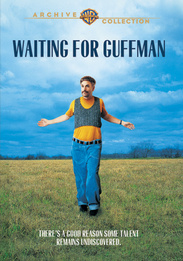 Corky St. Clair a flamboyant and desperate Broadway wannabe, is determined to get back to the bright lights of Broadway, and he things he was the ticket. He's created "Red, White, and Blaine", an ambitious musical celebrating the town of Blaine, Missouri's 150th anniversary. The residents pin their hopes on being discovered in Corky's hilariously hapless theater production and on reports that big-time talent scout Mort Guffman will be in the audience to discover them.