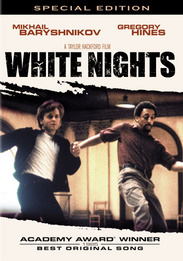 The passionate worlds of dance and global politics collide in this explosive thriller from Academy Award nominated director Taylor Hackford (2004, Ray). In a role which hits close to home, ballet's Mikhail Baryshnikov plays Nikolai Rodchenko, a legendary Soviet dancer who has defected to the West - until a cruel twist of fate suddenly traps him back in Mother Russia. Tap dancer Gregory Hines co-stars as Raymond Greenwood, a cynical U.S. Army deserter ordered by the KGB to make Nikolai's "homecoming" permanent. Nikolai has pierced the Iron Curtain once and now only Raymond can help him make it again. Adding to White Nights' dramatic fire is the music of Lionel Richie (the Academy Award - winning Say You, Say Me).