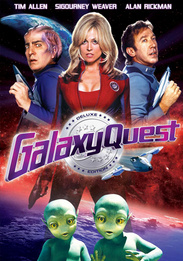 For four years, the courageous crew of the NSEA Protector set off on thrilling and often dangerous missions in space...and then their series was canceled! Now twenty years later, aliens in jeopardy have mistaken the Galaxy Quest television transmissions for historical documents and beamed up the crew of has-been actors to save the universe in this hilarious adventure, filled with out-of-this-world special effects.

Rated PG for some action violence, mild language and sensuality.