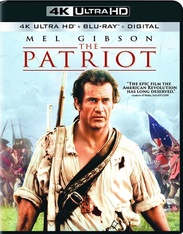 Mel Gibson stars as Benjamin Martin, a courageous and heroic South Carolina farmer who reluctantly joins the Revolutionary War to avenge a British colonel's brutal and senseless act against his family. Facing off in a climactic battle against the Green Dragoons, the most deadly branch of the British fighting forces led by General Cornwallis (Tom Wilkinson) and Colonel Tavington (Jason Isaacs), the peace-loving American must draw on his patriotic fervor and the skills of his son and fellow soldier, Gabriel (Heath Ledger), to help bring about the birth of a nation.