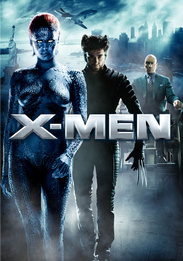 X-MEN is the live-action, big-screen adaptation of the most popular comic book series of the world. Outcasts since birth, the X-Men are the next step of human evolution, each born with a unique genetic mutation that gives them extraordinary powers that they've learned to harness for the greater good. But mankind fears what it doesn't understand, and the X-Men soon realize that the race they fight to protect against incalculable evil rejects them.