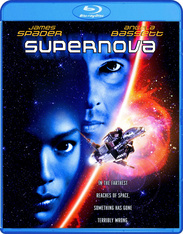 Supernova is a science fiction thriller that chronicles the high-stakes adventures of a deep space hospital ship and its six member crew. When their vessel, the Nightingale 229, answers an emergency distress signal from a distant galaxy, the crew soon finds itself in danger from the mysterious young man they rescue, the alien artifact he smuggled aboard and the gravitational pull of a giant star about to go supernova -- the most massive explosion in the universe. James Spader stars as co-pilot Nick Vanzant. Angela Bassetttakes on the role of Chief Medical Officer Kaela Evers. Robert Forster also stars as A.J. Marley, Captain of the Nightingale.