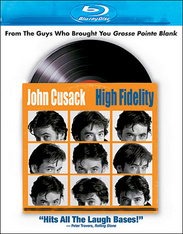 In a biting romantic comedy, Rob Gordon (John Cusack) is the owner of a semi-failing record store in Chicago, where he sells music the old-fashioned way -- on vinyl. He's a self-professed music junkie who spends his days at Championship Vinyl with his two employees, Dick (Todd Louiso) and Barry (Jack Black). Although they have an encyclopedic knowledge of pop music and are consumed with the music scene, it's of no help to Rob, whose needle skips the love groove when his long-time girlfriend, Laura (Iben Hjejle), walks out on him. As he examines his failed attempts at romance and happiness, the process finds him being dragged, kicking and screaming, into adulthood.

Rated R for language and some sexuality.