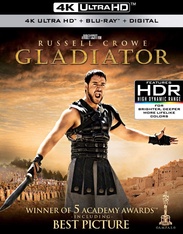 Set in Roman times, a banished Roman General fights his way back as a gladiator. The only power stronger than the Emperor is the greatest hero in all of the Empire.