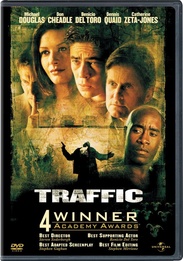 A twisting tale that attempts to chronicle the complex and diverse waron drugs. An Ohio Supreme Court Judge is appointed Drug Czar, but his loyalties are divided as he finds out his daughter is addicted to heroin. A jailed kingpin's wife attempts to take over his successful drug business. A local constable from Mexico struggles with his ownethics and how they play into the drug war.