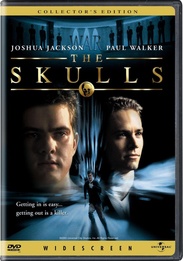 For Luke McNamara (Joshua Jackson), an invitation to join the prestigious secret college organization, The Skulls, is a dream come true. Unlike many of his New Haven classmates, Luke gained admission to the Ivy covered halls of learning through hard work and the crushing burden of student loans. And he knows it will take much more than good grades and being captain of the school's championship varsity crew team to secure a spot in a top law school. It's going to take a great deal of money and recommendations from prominent alumni-neither of which are at his disposal, despite his outstanding grades and years of sacrifice. Little does he know that The Skulls organization is not what it seems.