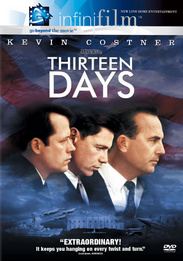 For thirteen extraordinary days in October 1962, the world stood on the brink of an unthinkable catastrophe. After the discovery of Soviet weapons in Cuba, events and tension escalate between two military superpowers and within the White House. President John F. Kennedy, Bobby Kennedy and Special Assistant to the President Kenneth P. O'Donnell are in the hot seat as they struggle to prevent nuclear war.