Dr. T And The Women 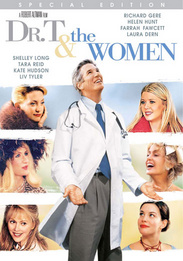 Dr. Sullivan Travis (Gere) is a man at the top of his game, a rich and successful Dallas gynecologist whose "religion" is women. Dr. T worships women. In his immediate family and in his office, they surround him. He is loving and giving to each and every one at all times -- he is their savior, and he would have it no other way. And sure enough, as in the story of Job, one day a higher force decides to test his faith. Once a man in complete control of his universe, Dr. T now finds himself buffeted by chaos and confusion.

Rated R for graphic nudity and some sexuality.