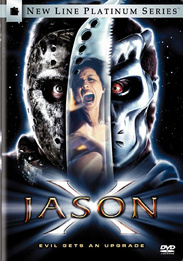 The year is 2455. The Earth is a desolate wasteland after a huge environmental disaster left the planet unsuitable for life. Humans escaped to the stars and flourished. Now, a team of student researchers have returned to study artifacts from a lost research facilty at Crystal Lake.

Their excavation uncovers two cryogenically frozen humans. The researchers take the frozen individuals back to their space craft and unintentionally start the reanimation process. One of these ancestors is a beautiful woman, while the other one is none other than Jason Voorhees. Jason's pissed. He's in space. And his long freeze hasn't cooled off his blood-lust. It doesn't take him long to adapt to his new environment and continue his murderous ways.

Rated R for strong horror violence, language and some sexuality.