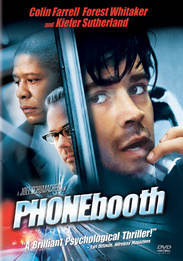 A slick New York entertainment publicist goes to a pay phone to call his mistress but before he can put his change in the slot, the phone rings. He answers and the voice on the other end tell him if he'll be shot if he hangs up the phone.

To make sure he knows this if for real, a red-dot from a gun laser shines right on his chest.

Rated R for for pervasive language and some violence.